Twitter Reacts To All Three Will Smiths Trending on Social Media 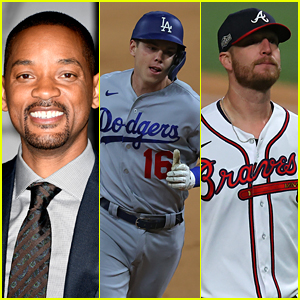 Will Smith was the top trend on social media on Friday (October 16) – however, it might not be the Will Smith that you’re thinking of.

The two athletes squared off each other tonight when the Dodgers’ Will took the plate and hit not just one, but three home runs against the Braves’ Will.

Twitter erupted seeing the epic showdown, and got Will, the actor, involved in some of the funny reactions.

“Will the real Will Smith please stand up?” the Dodgers‘ official Twitter account poked fun at the situation.

A fan of the actor tweeted this: “I saw Will Smith trending and feared the worst.
Turns out, it’s two baseball players named Will Smith.”

WILL SMITH ON WILL SMITH CRIME pic.twitter.com/pHWkfUIm5D

WILL SMITH VS. WILL SMITH pic.twitter.com/Smad3kmr4F

Will Smith at home rn pic.twitter.com/nxQKrH3dFI

Will Smith hit a home run off of Will Smith and neither of them are the actor, Will Smith

Let's go all Inception on this shit.

“Getting Jiggy With It” as the commercial break music after Will Smith homers off Will Smith is very well done.

Will Smith facing Will Smith. I wonder if The Fresh Prince is watching. #NLCS pic.twitter.com/aMFeUiPGac