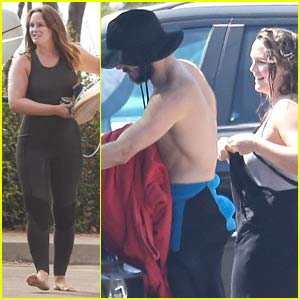 Adam Brody puts his toned physique on display while stripping out of his wetsuit after a day at the beach on Wednesday (September 23) in Malibu, Calif.

The 40-year-old The O.C. actor was joined at the beach by his wife Leighton Meester and they were seen working on their surfing skills that afternoon.

Both Adam and Leighton, 34, put a lot of sunscreen on their faces to protect themselves from the rays. While leaving the beach, they both put on a large red sweatshirt that allowed them to change out of their wetsuits in public.

It was recently revealed that Leighton gave birth to the couple’s second child, a baby boy, near the end of the summer. They are also the parents of a five-year-old daughter named Arlo.