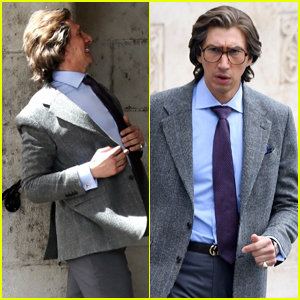 Adam Driver is filming one of House of Gucci‘s biggest scenes!

The 37-year-old actor was seen wearing a gray suit as he filmed his character Maurizio Gucci‘s murder scene on Thursday (April 15) in Rome, Italy.

If you didn’t know, Maurizio was gunned down by a hitman while arriving at his office on March 27, 1995.

His ex-wife Patrizia Reggiani was tried and convicted for hiring the hitman and orchestrating his assassination. She was sentenced to 26 years in prison and served 18.

In the Ridley Scott-directed film, which is based on the assassination, Lady Gaga will be playing Patrizia.

Last week, the 35-year-old entertainer was spotted wearing a wedding dress while on set.

If you missed, the Gucci family recently slammed the movie, saying that they are not happy with certain actor’s portrayals of their family based on the set photos.