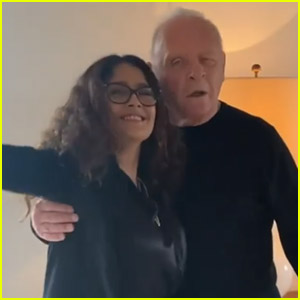 The 54-year-old actress took to her Instagram on Tuesday (April 27) to share a video of herself and the 83-year-old actor dancing after he won the Best Actor award at the Oscars several days earlier.

“Celebrating with the king @anthonyhopkins 👑 his 2nd Oscar for his extraordinary performance in The Father,” Salma captioned the post.

In the video, Anthony dances around his home in Wales to Leonard Cohen‘s song “Dance Me to the End of Love.”

At the end of the video, Salma joins in on the dancing before giving Anthony a big hug.

Anthony actually wasn’t at the ceremony when he won the award. Find out what he was doing!