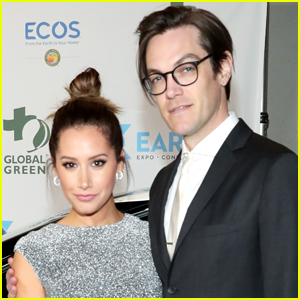 “[Chris] is determined to be an expert at the swaddle…” Ashley wrote on Friday (March 26) along with a photo of Chris wrapping Jupiter in a blanket.

“But seriously how sweet is he? Best dad,” Ashley added in a second pic.

Later that day, Ashley shared a sweet photo of Chris holding baby Jupiter in their backyard, along with the caption, “Baby’s first time outside.”

Back on Wednesday (March 24), Ashley announced that she and Chris had welcomed Jupiter the day before.

In a recently interview, Ashley revealed whether or not she’d watch High School Musical with her daughter – click here to see what she said!