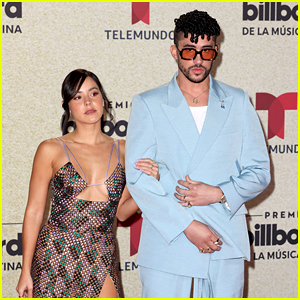 Bad Bunny and his longtime girlfriend Gabriela Berlingeri just made their first red carpet appearance together!

The couple walked the carpet together at the 2021 Billboard Latin Music Awards on Thursday (September 23) at the Watsco Center in Coral Gables, Fla.

It was a big night for Bad Bunny, who won 10 awards, including Artist of the Year.

Bad Bunny, whose real name is Benito Ocasio, has been dating Gabriela since 2017 and they have stayed relatively private throughout their relationship.

While speaking with Rolling Stone last year, Bad Bunny said, “Do people really think I’m spending quarantine alone? No! I am with someone, she is very special in my life. This quarantine has made me understand that she is the best companion I could have. I am happy with her. [People] don’t know she has helped me a lot in emotional aspects when I needed it the most.”