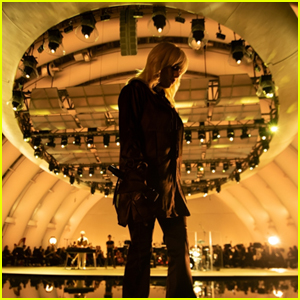 Billie Eilish is coming to Disney+!

The 19-year-old “Lost Cause” singer-songwriter revealed the exciting news of a cinematic concert experience, called Happier Than Ever: A Love Letter to Los Angeles, coming to the streamer on Friday, September 3.

Find out what she’ll do…

The Robert Rodriguez and Patrick Osborne-directed special was filmed at the Hollywood Bowl with Gustavo Dudamel and the Los Angeles Philharmonic, and will include all 16 songs from her new album, performed in order.

The special will also include “animated elements, taking viewers on a dreamlike journey through Billie’s hometown of Los Angeles and its most iconic backdrops.”

It will also include her brother FINNEAS and the Los Angeles Children’s Chorus, as well as world renowned Brazilian guitarist Romero Lubambo.

“Disney is incredibly iconic, so to collaborate on something like this is a huge honor. To be able to present my album in this way and dedicate it to the city that I love and grew up in is so exciting to me. I hope you love it,” she said in a statement.