Billie Eilish Reveals She Was Wearing a Wig for ‘Weeks’ Before Debuting Blonde Locks! 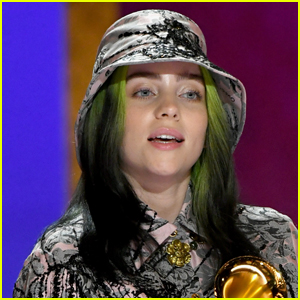 Earlier this week, the 19-year-old superstar shocked fans when she debuted her new platinum blonde hair.

Just a few days before the big reveal, Billie attended the 2021 Grammys while still rocking her green and black hair.

In a now deleted-Instagram post, Billie‘s hairstylist Lissa Renn revealed that she’s been gradually lightening the singer’s hair for over “6 weeks.”

“The process is real when you’re doing it right. 6 weeks to get all the black of of her ends without damaging it, along with her following my strict haircare regime. We actually loved all the stages of lifting the color too but the end result is [fire emoji],” Lissa wrote in the post that was captured by Billie‘s fans.

Fans then went crazy on Twitter realizing that Billie was probably wearing a wig to the Grammys, and she confirmed the theory with a post on her TikTok where she was sporting her green and black hair, before lifting it up at the front to reveal that it was a wig.

Back in February, Billie was seen out at the beach with her brother Finneas and had her head all covered up. Looks like it was to hide her blonde hair!

If you missed it, Billie’ Eilish‘s blonde debut became one of the most liked photos on Instagram!