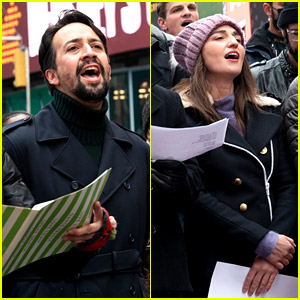 Many of Broadway’s biggest stars gathered in Times Square on Sunday (November 28) to honor the life and legacy of late composer Stephen Sondheim, two days after his death.

Lin-Manuel Miranda, Sara Bareilles and boyfriend Joe Tippett, Josh Groban, Laura Benanti, Brian Stokes Mitchell, and many more performers gathered on the iconic red steps in Duffy Square to perform the song “Sunday” from the Sondheim musical Sunday in the Park with George.

The event was produced by Erich Bergen, who just wrapped his third stint in the Broadway musical Waitress, and conducted by Michael J. Moritz.

You can watch a video clip below.

Did you know that Sondheim‘s voice can be heard in a recording in a brand new Netflix movie?