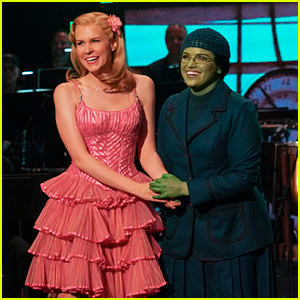 Broadway is back and Jimmy Fallon celebrated this week by having the stars of musicals perform on The Tonight Show!

Lindsay Pearce and Ginna Claire Mason, the current stars of Wicked, were on the show on Friday (September 17) to perform a medley from the beloved musical.

Ginna, who plays Glinda, kicked things off by performing “Popular” and then Lindsay, who plays Elphaba, performed “The Wizard and I.”

For those who don’t know, Lindsay got her start on the reality competition series The Glee Project back in 2011. She was a runner-up and received a two-episode arc on Glee. She made her Broadway debut in Wicked in February 2020 and only got to perform for a couple weeks before the show was shut down because of the pandemic.

There’s some news about the highly anticipated Wicked movie.

You can watch the performance video below!