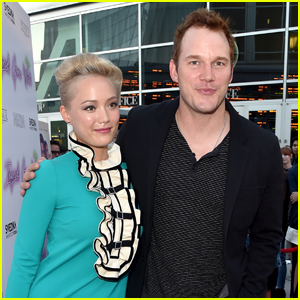 In case you missed it, a viral tweet comparing Chris Pratt, Chris Evans and Chris Hemsworth launched a heated debate about which Chris was the best and which was the worst. Many Twitter users labelled Chris Pratt the worst because they assumed he was a Republican.

PHOTOS: Check out the latest pics of Chris Pratt

Pom, who plays Mantis in the second Guardians film along with Avengers: Infinity War and Endgame, playfully referenced the debate in an Instagram posted Monday (December 28).

She congratulated Chris (Pratt) for his recent victory in the AGBO Fantasy Football League: “Congrats Chris on winning the superhero fantasy football league! So proud of you. I will re-read my favourite book ever, in your honor. Yay!” Pom is seen holding up a book with Chris Pratt‘s face on it, misleadingly titled “The One and Only Hemsworth”.

Chris recently commented on his standing in the Best-Worst Chris debate – see what he had to say!