Courteney Cox Reprises Her Role as Gale Weathers in ‘Scream 5’ – See the First Photos From the Set! 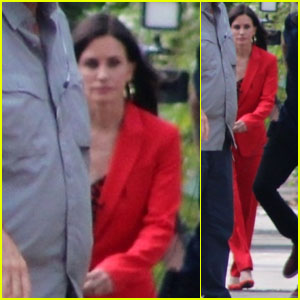 Courteney Cox is getting back into a classic role!

The 56-year-old actress was spotted reprising her role as news reporter Gale Weathers for the upcoming Scream 5 on Thursday (October 22) on set in Wilmington, North Carolina.

PHOTOS: Check out the latest pics of Courteney Cox

Courteney was seen arriving on set, where she was reporting from the scene of a crime. These are the first photos of the film in production!

David Arquette will be working with ex-wife Courteney Cox in the upcoming movie, and he’s opening up about what it will be like to reunite with her on screen.

Scream 5 will see the return of David‘s Sheriff Dewey Riley and Courteney‘s Gale Weathers. Another huge actor in the series also confirmed their return – but admitted they were apprehensive at first!