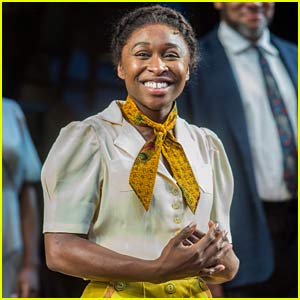 Cynthia Erivo is looking back at her Tony-winning work in the Broadway musical The Color Purple, just a few weeks after it was confirmed a movie version will be made!

The Oscar-nominated actress won a Tony, an Emmy, and a Grammy for her work as Celie in the musical and we sure hope to see her reprise her role in the movie.

If Cynthia does play Celie in the film, she could become the first person to ever win an EGOT from the same role.

“Goodness, I miss this 🥺 #proudartsworker,” Cynthia captioned a video of herself singing the big 11 o’clock number, “I’m Here.”

So many celebrities have commented on the video. Beanie Feldstein said, “I think about you singing this song at least once a day.” Halle Berry wrote, “just …dead! 🔥❤️.” Her co-star Danielle Brooks said, “I miss this too cue tears.”