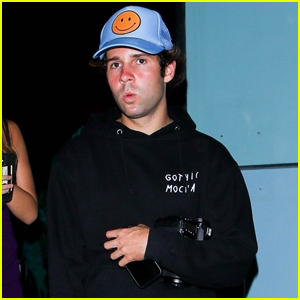 The social media star was spotted heading home after a fun night out with his friends on Thursday night (July 22) in Los Angeles.

PHOTOS: Check out the latest pics of David Dobrik

David stepped out in a black hoodie, a pair of black and white stripped pants and a baby blue baseball hat.

He made sure to bring his vlog camera along with him to document his birthday celebration.

Other stars who were seen at the the party were Vlog Squad members Todd Smith, Zane Hijazi and Heath Hussar, as well as Tana Mongeau and Bryce Hall.

Vlogger Jeff Wittek recently opened up about a dangerous stunt he did in one of David‘s vlogs that left him with serious injuries in a new documentary series. Find out more here…