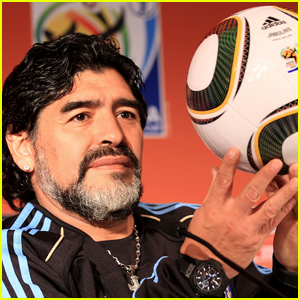 The Argentinian soccer legend has passed away at the age of 60 in Buenos Aires, according to the Argentinian newspaper Clarín on Wednesday (November 25). His lawyer then confirmed the reports.

According to the report, he died due to “cardiorespiratory arrest.”

He is widely considered one of the greatest soccer players of all time, leading Argentina to the World Cup victory in 1986. He was given the nickname “El Pibe de Oro” (“The Golden Boy”) and played for Boca Juniors, Napoli and Barcelona among others, and was responsible for the infamous “Hand of God,” used to describe a goal that he scored in the Argentina v England match during the 1986 FIFA World Cup, that eliminated England from the 1986 tournament.

He was also honored with the FIFA Player of the 20th Century award, and briefly coached Argentina during the 2010 World Cup.

He had a successful operation for a blood clot on the brain after being admitted to the Ipensa clinic in Buenos Aires with anemia and dehydration earlier in November, but alcohol withdrawal symptoms kept him in hospital for longer, BBC reported earlier in the month.

Our thoughts are with Diego Maradona‘s loved ones at this difficult time.