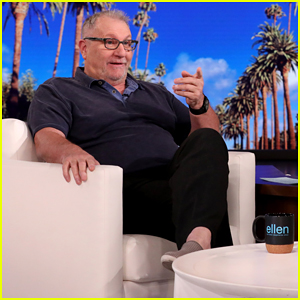 Ed O’Neill makes an appearance on The Ellen DeGeneres Show, airing Monday (March 9), and shares a super sweet story about introducing his daughters to Leonardo DiCaprio on Father’s Day!

The 73-year-old Modern Family star tells Ellen about his run-in with Leonardo this past Father’s Day at the Hollywood restaurant Rao’s with his daughters Claire, 24, and Sophia, 21.

“I like Rao’s, so we went and we had a little booth and we sat down and we had just ordered and she was on her phone, and I saw her look up, and all of a sudden she was stricken, I really thought there was something wrong with her,” Ed recalls. “I turned around and it was Leo DiCaprio … my daughter has had a crush on Leo since Romeo and Juliet.”

Ed says he offered to introduce his daughters to the A-lister, but they refused: “I said, ‘Alright, forget about it … so all of a sudden, I heard, ‘Hey Ed, Happy Father’s Day,’ I said, ‘Oh thanks Leo!’”

Ed O’Neill also shares which Modern Family cast members were the most emotional after they taped the series finale of the long-running hit comedy, and reveals how he found out about the mid-season cancellation of his hit series Married… with Children.