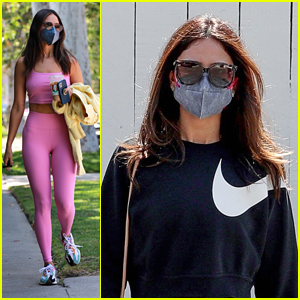 Eiza Gonzalez went bright and cheerful for her workout look earlier this week in Los Angeles.

The 31-year-old actress and singer was spotted out in a cute pink look while arriving for a private workout class.

Over the next few days, Eiza was spotted in a one shoulder top and black pants that showed off her abs, and also a cool Nike sweater while out and about in the city.

Earlier this week, Eiza also revealed that she’d not only be starring in the upcoming movie, Spirit Untamed, she’s also singing in it.

She stars as Milagros, who is the mother to Isabela Merced‘s Lucky.

“This is one of the most important songs,” Eiza shared with Billboard about the song the two made for the movie together. “It’s a form of lullaby that ties both Lucky and Milagros throughout the whole film and it resonates a lot with my culture.”

Listen to it below!

Just recently, Eiza made an appearance on a talk show to promote another new movie she’s in – Godzilla vs. Kong.