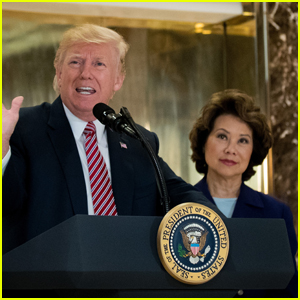 Elaine Chao is stepping down.

The U.S. Secretary of Transportation confirmed in a statement on Thursday (January 7) that she is resigning, and becomes the first member of Trump‘s Cabinet to leave the administration following the breach of the U.S. Capitol on Wednesday (January 6) by Trump supporters.

PHOTOS: Check out the latest pics of Donald Trump

“It has been the honor of a lifetime to serve the U.S. Department of Transportation,” she wrote alongside her statement, adding that she was “deeply troubled” by the “entirely avoidable” events at the Capitol building.

“Our country experienced a traumatic and entirely avoidable event as supporters of the President stormed the Capitol building following a rally he addressed. As I’m sure is the case with many of you, it has deeply troubled me in a way I simply cannot set aside.”

“I am tremendously proud of the many accomplishments we were able to achieve together for our country and I will never forget the commitment you have for this Department and the United States of America,” her statement continued.

She added that she will help Pete Buttigieg in taking on the department.

It has been the honor of a lifetime to serve the U.S. Department of Transportation. pic.twitter.com/rFxPsBoh6t