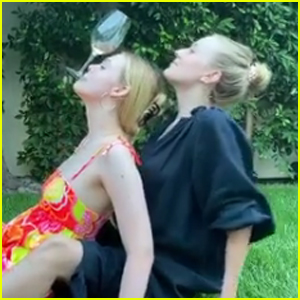 Elle and Dakota Fanning are showing off their wine-drinking skills!

The 22-year-old The Great actress took to her Instagram on Saturday (August 1) to share a video of she and the 26-year-old The Alienist actress to partake in the viral #WineChallenge, which Cameron Diaz also recently completed.

PHOTOS: Check out the latest pics of Elle Fanning

In the video, Elle sits between Dakota‘s legs while holding the bottom of a wine glass in her mouth.

She then tipped her head back while trying to pour the wine into Dakota‘s mouth.

Back in early July, it was announced that Hulu picked up Elle‘s show The Great for a second season.

You can watch all 10 episodes of the show on Hulu now!