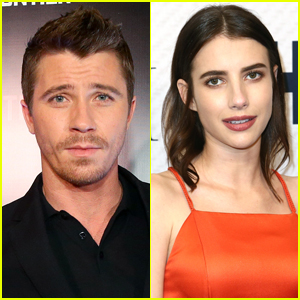 Garrett Hedlund opening up about his quarantine with Emma Roberts!

The 36-year-old actor shared that one of the “plus sides” to the pandemic was the time he and Emma got to spend together and revealed that there was one TV show they watched that brought them closer together!

PHOTOS: Check out the latest pics of Emma Roberts

He told TooFab that they had watched the first season of Amazon Prime’s series Modern Love.

“There were two little plus sides to the pandemic. One was was getting to binge watch Modern Love, it was one of my favorite things to watch throughout the whole pandemic,” the actor said.

“I mean, never held my gal’s hand tighter or held her closer,” he added. “And we never wanted it to end.”

Garrett actually appeared on the second season of the show and he said one of his favorite moments from the past year was traveling to upstate New York in order to film the series.

He stars opposite Anna Pacquin in the episode “In the Waiting Room of Estranged Spouses,” where the pair bond after they realize their husbands are cheating on them with each other.

The actor reflected on his role in the show and said he thinks communication in the most important part of a healthy relationship.

“Being able to communicate, vulnerable moments and all the above,” he said. “In this situation or what kind of drew me to this character was, in an interview that I’d heard with the actual guy, it sounded like he kind of felt undeserving of love, which is rare for one to think a soldier would feel. Somebody who fought for their country and comes back and is capable of so much, but it can still feel undeserving of love, and I think that’s an emotion that [director] John Crowley really want to explore.”

“I remember we were shooting a scene and I asked him afterwards, ‘Was wrong of me to be sentimental during that scene? Was I dropping the guard too quick?’” he continued. “And he said, ‘Man, I think it’s so refreshing to see somebody who’s coincidentally a soldier show this side.’ We always think they’re playing tough guy and from that moment, it was refreshing sailing. It wasn’t Mr. Macho, it was Mr. Everyday Guy that just so happened to be a soldier, did something like this, but feels just like the rest of us.”

Garrett and Emma have been together since 2019. They welcomed their first child together, a baby boy named Rhodes, in December 2020.

Emma shared a super sweet post of Rhodes on Mother’s Day. Check it out!