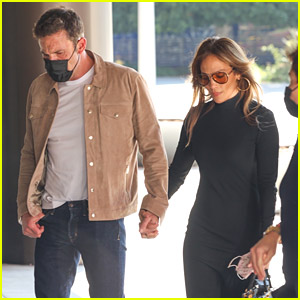 Jennifer Lopez holds hands with Ben Affleck as they arrive for an event together in Los Angeles on Sunday afternoon (October 3).

The 52-year-old actress and singer coordinated her black, ruffle trimmed dress with a pair of knee high boots, as she headed inside a venue with Ben.

The event was rumored to be a screening for Ben‘s upcoming movie, The Tender Bar, which he filmed just before rekindling his romance with Jennifer.

Directed by George Clooney, The Tender Bar is an adaption of the memoir of the same name by Pulitzer Prize-winning author and film subject J.R. Moehringer, and “recounts Moehringer’s adolescent years, as he grows up on Long Island in search of a father figure among the patrons at his uncle’s bar.”

Since wrapping filming on the project in Boston, Ben and Jennifer have been seen out a lot together. Most recently, the couple was spotted sharing a few kisses out in New York City together.