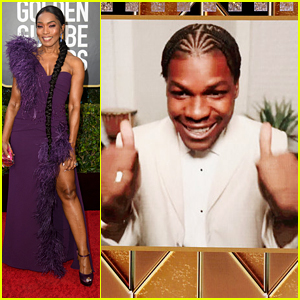 John Boyega celebrates his big win at the 2021 Golden Globes!

The 28-year-old actor picked up the award for Best Supporting Performance in a Series, Miniseries or Television Film for his role in Amazon’s Small Axe.

He was nominated alongside Dan Levy, Brendan Gleeson, Jim Parsons and Donald Sutherland.

See his winning speech below!

Angela Bassett presented the award to John, who was in London and streaming into the event.

She looked stunning on the red carpet and on stage in a Dolce and Gabbana gown and shoes with Dena Kemp and Graziela jewelry for the big event from Los Angeles.

The 2021 Golden Globes, hosted bi-coastally by Amy Poehler and Tina Fey, on airing NOW on NBC.