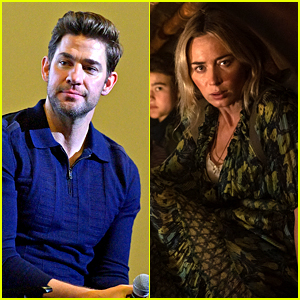 John Krasinski is opening up about one of the most intense and thrilling scenes in A Quiet Place II and just how it almost cost him his marriage to Emily Blunt.

Speaking to CinemaBlend. the 41-year-old director revealed that he put his marriage on the line for the bus scene.

Click inside to see what John shared about the scene…

John revealed that he had told Emily that the scene would be done practically, which means that it wasn’t going to be CGI or the effects were added in later. Instead, the bus was actually driving towards her at 40 miles per hour.

“Emily’s (stunt) is so real, I think I put my marriage on the line when I put her in the car. That’s true,” John shared. “When I was explaining to her onset all of the things that were going to happen, and I said, ‘You’re going to hit this stuntman. That car’s going to come three feet from you. And then this bus is actually going to clock at 40 miles an hour,’ her face fell and she went, ‘But not really.’ And I went, ‘No, no, the bus is coming at you at 40 miles. That’s a real bus. And that bus hits that car, and all that is totally real.”

He continued, “Emily, God love her, she still got in the car, but there are little boys in the car. Marcus is in the car. There’s no switch. There’s no nothing. And to go to those parents and say, ‘I promise you the stunt, Paramount safety (and) the stunt guys, they have all okayed this. This is all possible.’ We had that bus within a hair’s breadth of being able to stop. It had all these special breaks so that we could stop real quick. So it’s three weeks of rehearsal for one minute of shooting.”

John also revealed that the take you see on the big screen with Emily is the first one.

“I said to Emily, ‘Do you want to run it once?’ And she’s awesome. She said, ‘No.’ She’s like, ‘Just put me in it.’ And so that take that’s in the movie is her first tale. So that’s her really saying ‘Jesus Christ’ and ‘Oh my God. Oh my God.’ Because she had no idea. It’s like going on the best rollercoaster ride of your life. That was the first take that we did.”

Just recently, John also opened up about why he made the sequel.