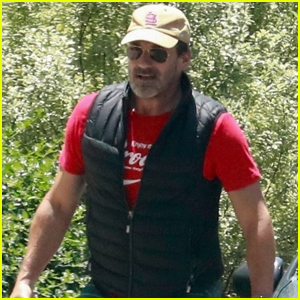 Jon Hamm is getting in a little exercise!

The 50-year-old Mad Men actor went for a walk around his neighborhood with his dog Splash on Thursday afternoon (May 27) in Los Feliz, Calif.

PHOTOS: Check out the latest pics of Jon Hamm

Jon showed off his scruffy beard while wearing a black puffer vest paired with a red T-shirt and green, striped shorts as he soaked up the sunny weather on his walk.

If you missed it, it was just revealed that Jon will provide the voice of a fan favorite Avenger in Hulu and Marvel’s upcoming adult animated series M.O.D.O.K.

Find out who he’ll voice and when the show will debut here!

Recently, Jon opened up about auditioning for a very popular teen show in the early 2000s. Find out which one it was here…