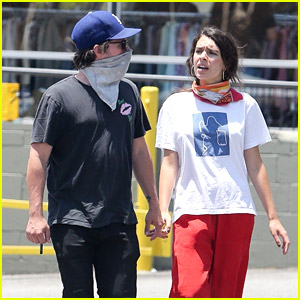 Josh Hutcherson holds hands with girlfriend Claudia Traisac while out and about in Los Angeles over the weekend.

The longtime couple continued their adventures the next day with a bike ride around the city.

PHOTOS: Check out the latest pics of Josh Hutcherson

In a new interview with Entertainment Weekly, Josh looked back on some of his biggest movie and television projects and revealed his time on The Hunger Games was a double edge sword.

“It was worlds apart from anything I have ever experienced. It’s like a double-edged sword,” he shared about the fame it brought him. “Obviously the benefit of having more projects come your way is great. But when I set out to become an actor at 8, being famous and being recognized was not on my radar. I just wanted to make movies.”

Josh adds, “That naiveté followed me until The Hunger Games slapped me in the face. It’s hard for anybody to digest, especially being a kid from Kentucky.”

“It made me realize the kind of actor I wanted to be. The idea of doing big, big projects that make you even more well-known doesn’t sound as appetizing. If that opportunity came up again, I would have to think about it more.”

If you missed it, The Hunger Games franchise is continuing with a movie based on the prequel.