Karen Gillan Is Finally Obsessed With ‘Outlander’ & Sam Heughan Offers Her A Part! 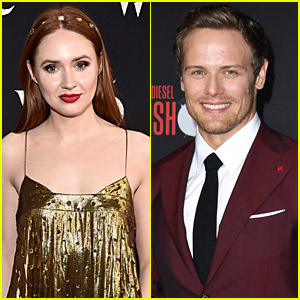 Karen Gillan and Sam Heughan had a cute little exchange on Twitter this week and it was all about Outlander.

The 33-year-old Scottish actress, who you know from her roles in Guardians of the Galaxy and Doctor Who, seems to have finally tuned into Starz series Outlander, and revealed she is officially obsessed with it.

After admitted she was “late to the party” with the Outlander craze, Sam replied to Karen on social media and kind of offered her a small part on the show.

“Still time to find you a wee part Karen…,” Sam wrote to her.

Still time to find you a wee part Karen… https://t.co/mIWtqmb30K

It seems that Karen is up for it!

“Can I be an extra loitering around Inverness asking people “what’s the Craic, eh?” she mused. Inverness is where Karen was born.

Check out what Sam replied below!

Yes, with a bottle of bucky… but you may not be ginger enough I’m afraid. https://t.co/j99D8GCQrx