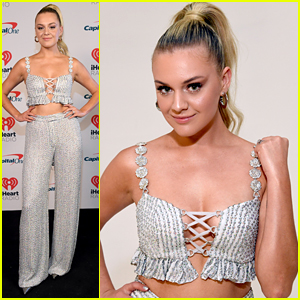 Kelsea Ballerini shines like a diamond in a cute silver outfit backstage at the 2020 iHeartCountry Festival held at The Steel Mill in Nashville, Tenn., on Friday (October 23).

The 27-year-old “hole in the bottle” singer took the stage to perform a few of her hit songs, just after performing with Halsey at the 2020 CMT Awards earlier in the week.

After her Coyote Ugly inspired performance with Halsey aired, Kelsea took note of all the critics of the performance and kindly told them to “shut up.”

“After reading way too many comments, I’d like to remind people that there are different kinds of country music,” Kelsea wrote on her Instagram. “And none are more ‘real’ than others when it comes from an honest place, that women can wear whatever we want and shouldn’t be called names and criticized for it, and that if you don’t have something nice to say, politely shut up.”

But that wasn’t it, there were also claims of lip-syncing.

“Here’s the thing,” one follower wrote in her comments. “To me the issue isn’t the outfit. My issue is the lip-synching. Every performance last night was lip synced and it was very obvious.”

Kelsea replied, “Not true, every performance was prerecorded because, ya know, COVID.”