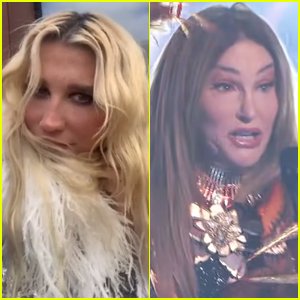 Kesha is sharing her reaction to Caitlyn Jenner performing her breakout hit song “Tik Tok” on The Masked Singer!

During the second episode of season 5 of the hit singing competition series, the 71-year-old Olympian and reality star made an appearance on the show dressed up in the Phoenix costume.

Unfortunately, Caitlyn was unmasked and sent home at the end of the episode.

Now a few weeks later, Kesha has finally watched Caitlyn‘s performance of her song, and shared her hysterical reaction!

“Live for a cover and live for this outfit… but I mean I have to go…” Kesha wrote on TikTok.

In the post, Kesha shared a side-by-side of Caitlyn‘s performance and herself watching it, with her eyes bugging out a few times before she hides her face with her glittery and feathered coat.

Make sure you check out all the clues and guesses for the remaining contestants on The Masked Singer!

##duet with @kaylum_sharp feeling like P Diddy… I think?