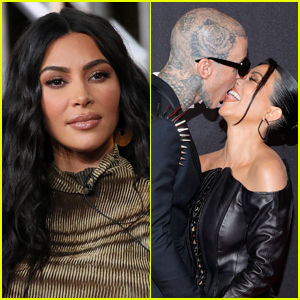 Kim Kardashian is coming to her sister’s defense.

The Keeping Up With the Kardashians reality TV star made an appearance on The Ellen DeGeneres Show on Thursday (September 16).

During the appearance, Kim spoke about Kourtney Kardashian and Travis Barker‘s relationship, and their PDA that’s made headlines.

She said that new relationships have been able to “blossom” since filming ended on Keeping Up With the Kardashians.

“I love [Kourtney and Travis’s] relationship. They’ve grown so much together. To think that they’ve been neighbors and friends for almost 15 years. Neighbors for almost a decade!” she said.

“They are, like, at each other like it’s the last time they’re gonna see each other all the time,” Ellen joked, to which Kim called it “so cute.”

She reiterated that they’re “cute” for a third time, adding “that’s what they do” and saying that she loves the couple together.

Find out how some other people feel about the couple’s PDA!