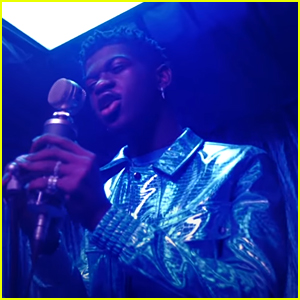 Lil Nas X gets in the blue lit up booth to record a brand new song in Logitech’s Super Bowl Commercial.

“We stand there in defiance,” Lil Nas X narrates the ad. “We the makers. We the groundbreakers. We the creators, the screamers, and dreamers.”

He goes on, saying, “We defy expectations, perceptions and misconceptions. We defy what logic says we should look like, sound like, be like. We defy genres, algorithms and entire industries.”

The song he is singing in the commercial is titled “Call Me By Your Name” and will be out soon!

This is not Lil Nas X‘s first time in a Super Bowl Commercial. He appeared in a Doritos advert just last year!