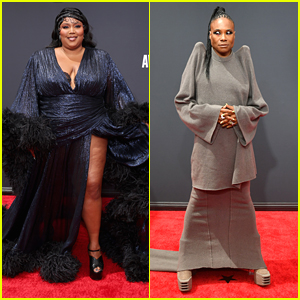 Lizzo looks glamorous in a black sparkling gown while arriving at the 2022 BET Awards held at Microsoft Theater on Sunday (June 26) in Los Angeles.

The 34-year-old rapper hit the red carpet next to Billy Porter, who stunned in a dramatic look for his arrival.

Lizzo, Jack and Chance will all be performing at the show later tonight, and Jack is also nominated for Best Male Hip Hop Artist.

Click inside to see 65+ pictures of Lizzo, Billy Porter and more stars at the 2022 BET Awards…