Lizzo Shares More Details from Her DMs with Chris Evans! 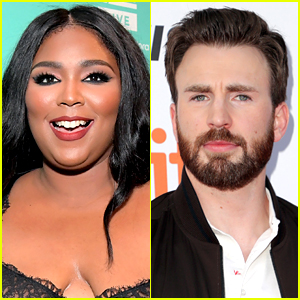 Lizzo‘s saga with Chris Evans is continuing and she has shared more details from their DMs!

It all started a couple weeks ago when the 32-year-old Grammy-winning singer slid into Chris‘ DMs on Instagram and then shared a screencap on TikTok.

In a funny video, Lizzo revealed that she sent Chris a combination of emojis to look like a woman tossing a basketball. Basically, she was saying that she was shooting her shot!

That video featured Lizzo lip-syncing to audio by Tatayanna Mitchell, saying, “The reason I’m upset about this one is because I know I’m not gonna be able to marry him. And honestly, it hurts me to the core. Because damn papa, he a rare breed, no comparing. Like, Chris…”

Lizzo captioned the original clip saying, “Don’t drink and DM, kids…. for legal porpoises this is a joke.”

A couple days later, Lizzo revealed that Chris responded to the drunk DM and said, “No shame in a drunk DM. God knows I’ve done worse on this app lol.” He might be referencing an explicit pic he once posted of himself.

Lizzo has now revealed more messages that they exchanged!

She responded to him and said, “Well.. they say u miss 100% of the shots you never take, (and even tho I unsent it like a dork), I’m glad you know I exist now.”

Lizzo covered up her response to the Captain America actor and we can only see a couple words of Chris‘ next reply, but he definitely seemed amused. See the screencaps in the gallery!

Last week, Lizzo stripped off her clothes and shared a completely non-retouched photo for a great reason.

Reply to @tuana612 Update on Jamal

♬ Follow me song is Too much FYOTP YT – 🦈