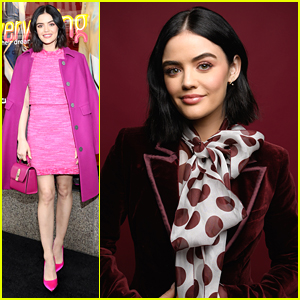 The 30-year-old actress is promoting her new CW series this week, ahead of the premiere tomorrow night on the network.

“So often in TV and film, women are chasing after a guy. We grow up thinking you need to get married, we need to have kids, we need to do X, Y, and Z,” Lucy shared with Advocate about her character’s aspirations. “I’ve never felt that way. I’ve always put my dreams first. I think Katy is that way too.”

She also adds that “[Jorge/Ginger is] going to become an icon for people. It’s great that we’ve been given the freedom to sort of have these characters and let them be true and grounded.”

FYI: Lucy wore a TommyxZendaya look with Manolo Blahnik shoes to Build Series. She then wore a kate spade new york look to the unveiling.