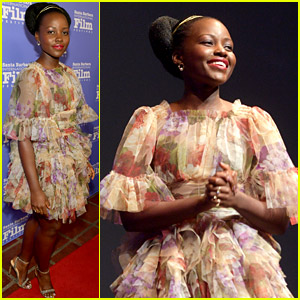 Lupita Nyong’o appears on stage to accept the Montecito Award at the 2020 Santa Barbara International Film Festival on Monday (January 20) at the Arlington Theatre in Santa Barbara, Calif.

The Oscar-winning actress reflected on her six-year film career thus far while accepting the honor.

“It still feels early for me to be reflecting on a body of work, but I feel blessed to have had the diversity of experience I have had so far,” Lupita shared with the crowd (via Noozhawk.com). “It’s something I have always wanted.”

“As an actor, real freedom is having that choice, and it’s hard to get there because acting is reliant on many other things,” she added. “Acting is a privileged thing. It’s luxurious to play all day…and have people look up at you…It’s a luxurious thing, and also a thing the comes with a lot of responsibility.”