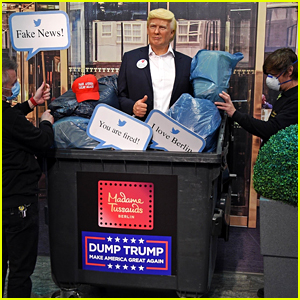 The shade from Madame Tussauds is real this morning!

The wax museum in Berlin, Germany put their Donald Trump wax figure in the garbage on Friday (October 30) ahead of the 2020 US Presidential Election.

The iconic museum that features wax figures of thousands of celebrities put the current president’s figure in a dumpster that read “Dump Trump” and had his iconic phrases surrounding him like “You’re Fired” and “Fake News.” The wax figure was then wheeled out of the display by two men wearing face masks.

Trump was given a wax figure in multiple Madame Tussauds locations across America after he won the election in 2016. So far, no word if he will be kept at those locations.