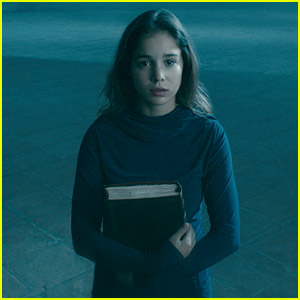 Alba Baptista might not be a name you know yet, but she’s bound to become a big star thanks to her brand new Netflix series Warrior Nun!

The series was released on the streaming service on July 2 and it’s already climbing the charts as one of Netflix’s most watched shows.

Warrior Nun revolves around a 19 year-old woman (Baptista) who wakes up in a morgue with a new lease on life and a divine artifact embedded in her back. She discovers she is now part of an ancient order that has been tasked with fighting demons on Earth, and powerful forces representing both heaven and hell want to find and control her.

So, who is Alba? She is a 22-year-old Portuguese actress who already has achieved big success in her home country. Now, she’s taking on the world with her new series!

Alba has had major roles in several Portuguese series like A Impostora, Jordins Proibidos, and Filha da Lei. It looks like she’s hoping to expand her career as Alba now has talent representation in the U.S., the U.K., and Portugal. She also speaks four languages – English, Portuguese, French and German.

You can stream the full first season of Warrior Nun now on Netflix!