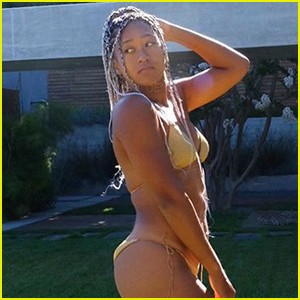 Naomi Osaka is clapping back at the haters.

The 22-year-old Japanese tennis player recently shared a few photos on Instagram of herself posing in a bikini while hanging out in her backyard.

“Welp mornin’ to you I guess ☀️” Naomi wrote along with the photos.

After posting the photos, several critics called her out, saying that she should maintain her “innocent image.”

Naomi then took to her Twitter to clap back at the haters.

“I just wanna say it’s creeping me out how many people are commenting @ me to maintain my ‘innocent image’ and ‘don’t try to be someone your [sic] not’. You don’t know me, I’m 22, I wear swimsuits to the pool. Why do you feel like you can comment on what I can wear?” Naomi tweeted.

If you missed it, Naomi recently became the highest paid female athlete ever!