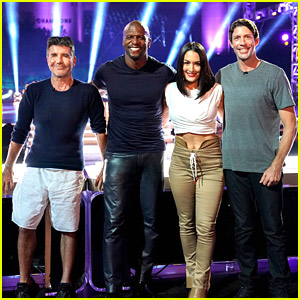 NBC is investing in more America’s Got Talent!

The network revealed this week that they’ve ordered a spinoff from the flagship talent competition, called America’s Got Talent: Extreme.

Click inside to read more about the new AGT show…

The brand new competition will see the return of Terry Crews as host, along with Simon Cowell as a judge alongside Nikki Bella and Travis Pastrana.

This new series will showcase the most outrageous, unique and jaw-dropping acts of enormous scale and magnitude that simply cannot be confined to a theater stage.

Each week contestants will go head-to-head in the most wild, intense and often times beautiful performances to vie for a $500,000 prize and the champion title.

Nikki is familiar to fans as a former WWE Hall of Famer, former contestant on Dancing With the Stars and stars on her own reality show, Total Bellas, with twin sister Brie.

Travis is a motorsports competitor and stunt performer who has won a number of X Games gold medals.

The show compares to the Go-Big Show, which premiered earlier this year on TBS.

The winner of AGT season 16 was just crowned a few weeks ago. See who won!