Paul Mescal Steps Out in Short Shorts on Set of His New Film ‘Carmen’! 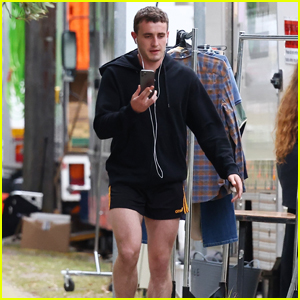 Paul Mescal is bringing back the short shorts!

The 24-year old Normal People star and co-stars Elsa Pataky and Melissa Barrera were spotted walking to their trailers on set for their new film Carmen in Sydney, Australia on Wednesday (January 20).

Paul showed off his legs in a pair of short shorts as he answered calls. The Irish-actor rocked a similar pair while strolling around in Milan during fashion week.

During a break with some of the film crew, Paul was seen sharing a COVID-safe handshake with one of his pals while Elsa grabbed a quick bite as she headed back to her trailer.

According to Variety, Carmen is “a modern-day reimagining of one of the world’s most celebrated operas.” The adaptation is being directed by Natalie Portman‘s husband Benjamin Millepied.

Paul recently opened up about the toxic side of fame – click here to read what he said.