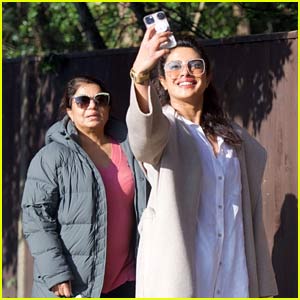 Priyanka Chopra is spending some quality time with her mom Madhu!

The 38-year-old actress was spotted snapping some selfies on her phone while walking around the Holland Park neighborhood on Sunday (February 28) in London, England.

Priyanka was dressed in an all-white outfit with a cream colored coat.

Priyanka‘s husband Nick Jonas has a new album on the way and he revealed on The Tonight Show Starring Jimmy Fallon that the music was written while she was away filming The Matrix 4 last summer.

“I sort of started writing this record back in July. My wife was over in Germany finishing up this little movie called The Matrix,” Nick said. “And I was like, ‘You know, I feel very disconnected from the world, first of all, and now my person.’ And I just dug in writing … within a couple of days I was like ‘Oh, this is a solo album.’ And a few days later I was like, ‘This is a kind of themed album.’”

Listen to the new song “This is Heaven,” which Nick says is a love letter to Priyanka!