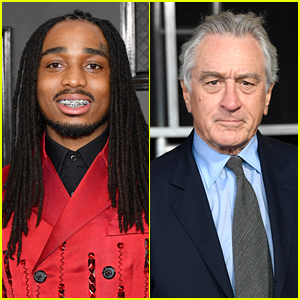 Quavo is set to make his feature film debut in Wash Me In The River alongside Robert De Niro, and in a new interview, had nothing but great things to say about the actor.

Speaking with Billboard, the Migos rapper shared that their first meeting was very chill.

He continued, “I was like, ‘Yeah, he’s finna go home and look me up.’ It was too hard. I couldn’t wait to tell my Mom dukes that I’m gonna be on the screen and kicked it with him. He’s a nice dude.”

Quavo also opened up about his character, who he says is a “ruthless gangster, ruthless killer named Coyote.”

“It’s just an honor to be on the screen with Robert De Niro, Jack Huston and John Malkovich,” he adds. “I’m just blessed and I can’t wait for y’all to see it. It’s a very action-packed movie. I had fun doing it. I stayed in Puerto Rico shooting for a whole month grinding. There was some long film days. Them film days are different. It’s like you’re shooting a video all day.”

This other musician will also be in the movie!