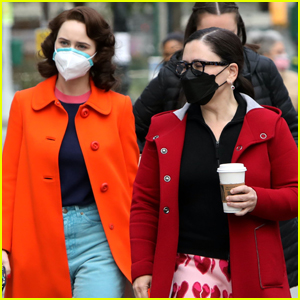 Rachel Brosnahan and Alex Borstein head back to the trailers after a coffee run on Tuesday afternoon (April 13) in New York City.

The two Emmy-winning actress stayed safe in face masks as they chatted during some downtime on set of The Marvelous Mrs. Maisel.

PHOTOS: Check out the latest pics of Rachel Brosnahan

The following day, Rachel was spotted wearing a bright blue dress and lavender hat while staying safe under a completely enclosed umbrella while getting ready to film another scene.

Rachel and Alex have been hard at work filming the upcoming fourth season of The Marvelous Mrs. Maisel for the past few months.

A few weeks ago, Rachel was spotted filming a scene in a park with this famous new co-star!

During a recent interview, Rachel Brosnahan revealed the item she stole from set of the show.