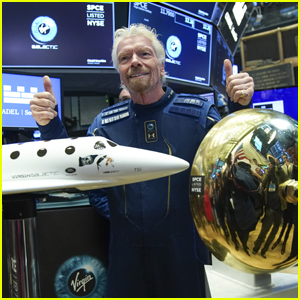 Sir Richard Branson will be taking off shortly.

The 70-year-old mogul’s Virgin Galactic Unity 22 mission, which was due to launch earlier on Sunday (July 11), was pushed back a bit due to some bad weather – but it’s still happening!

PHOTOS: Check out the latest pics of Richard Branson

The reason it was initially delayed is because of bad weather in New Mexico, Space.com reported.

The company planned to launch a crew of five people into suborbital spaceflight at 9 a.m. ET. Virgin Galactic’s SpaceShipTwo VSS Unity and carrier plane VMS Eve were going to launch from Spaceport America.

The stormy weather put a stop to their plans, however. Now, it will take off later, around 10:30 a.m. ET.

The entire flight will reportedly take about 90 minutes, including the ascent, flight to space and return to Earth, landing back at Spaceport America.

Virgin Galactic is livestreaming the launch in a webcast hosted by Stephen Colbert. An artist will also be debuting a new song for the launch.