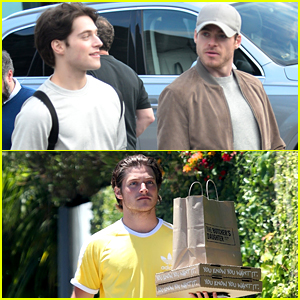 It looks like Richard Madden is spending his time in quarantine with Teen Wolf actor Froy Gutierrez!

The 33-year-old Golden Globe-winning actor has been living at his former Game of Thrones co-star Emilia Clarke‘s home in the Venice neighborhood of Los Angeles, according to The Sun.

Richard and Froy, 22, were first spotted together back in February while walking around Venice and it appears that Froy is living in the home as well.

On April 10, Froy posted a photo of his cereal on the kitchen counter and wrote, “I am once again staying home.” If you check out the Architectural Digest feature on Emilia‘s Venice home, you’ll notice that the kitchens are the same.

We also have new photos of Froy picking up lunch from local Venice restaurant The Butcher’s Daughter on Saturday afternoon (May 16). He was seen bringing the take-out food back to the home, seemingly for him and Richard to enjoy.

Last year, there was speculation that Richard was dating 13 Reasons Why actor Brandon Flynn and he even responded to those rumors in an interview.

See more photos in the gallery…