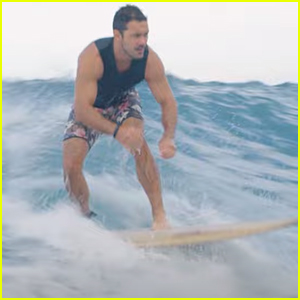 Ryan Paevey is doing his own stunts in Two Tickets to Paradise.

The 37-year-old star opened up to JustJared.com in an exclusive interview about his new Hallmark movie, which premieres tonight, and loved getting in the water for the film.

“Two Tickets to Paradise is basically Ashley Williams, and I both have a wedding on the same day, and we both get stood up,” Ryan explained about the flick to us. “We basically come to the agreement that, okay, here’s the deal. You’re going to go on yours [honeymoon], and I’m going to go on mine.”

He added that the two end up staying at the same hotel, which is very couple-centric.

“We end up at this love central hotel, which is kind of funny given our circumstances, and some folks, I think, mistake us for a couple. and we kind of run with it for a little while. There’s some kayaking, and there’s some activities. There’s a three-legged race and a lot more.”

Ryan admits that he first loved the movie all because of the “location, obviously, and also because there’s surfing in it, and I got to do myself.”