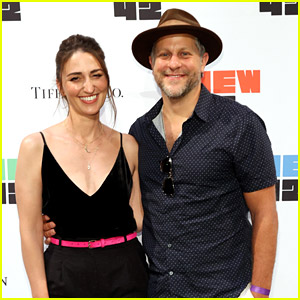 Sara Bareilles and Joe Tippett are such a cute couple!

The 41-year-old Grammy-winning singer and the 39-year-old actor posed for photos on the red carpet at the Let’s Get This Show on the Street event on Saturday (June 5) in New York City’s Times Square.

The event was held on 42nd Street to celebrate arts educators with an outdoor celebration. Sara performed at the concert and Joe shared a photo of her on stage with In The Heights‘ Anthony Ramos‘ billboard seen above her.

“I understand that @ARamosofficial is the new Patron Saint of Broadway watching over us…” Joe tweeted.

For those who don’t know, Joe played the role of John Ross on the hit HBO series Mare of Easttown and a huge reveal about his character was one of the big moments of the finale.

Sara and Joe have been dating for years after meeting while working on the Broadway musical Waitress. She wrote the show and he was one of the original cast members in the pre-Broadway run.

I understand that @ARamosofficial is the new Patron Saint of Broadway watching over us… pic.twitter.com/JbWkAhVuJ3