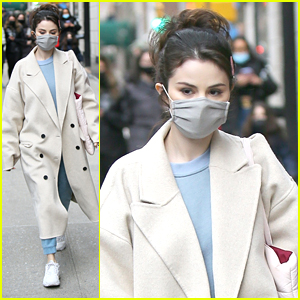 Selena Gomez wears her hair in a cute updo with her face mask while out and about in New York City on Sunday afternoon (January 17).

The 28-year-old singer and actress, keeping warm in a ivory trench coat, is currently filming her upcoming series, Only Murders In The Building, alongside Martin Short and Steve Martin.

PHOTOS: Check out the latest pics of Selena Gomez

In a new interview, Selena opened up about her decision to call out social media sites like Facebook, Google and Twitter for their roles in the spread of misinformation about the elections, coronavirus and more.

“I think that I started with reaching out to people immediately, like directly. I wasn’t afraid to call out a Mark Zuckerberg or speak what I wanted to speak, because I could not handle what I was seeing. And it’s, like, already we’re getting progress, I can tell,” she told Zane Lowe.

Calling out Facebook first, she added, that the platform is “supposed to be a place where people are there to share their life, not to create hate and to hurt people…I just think it’s necessary to call the people out who are responsible, but at the same time being able to do what I can.”

Here’s what Selena first said in her comments to the social media platforms.