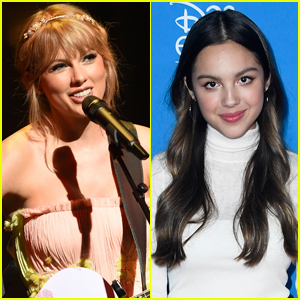 PHOTOS: Check out the latest pics of Taylor Swift

Olivia previously opened up about the impact of Taylor‘s track “Cruel Summer” on the song, and just added Taylor, as well as co-writers Jack Antonoff and St. Vincent as co-writers for inspiring the song’s bridge.

Their names also appear for anyone to see in the Spotify and TIDAL songwriting credits.

This is not the only song to feature Taylor‘s music on Olivia‘s album: “1 Step Forward, 3 Steps Back” borrows from Reputation‘s “New Year’s Day.”

Ed Sheeran recently revealed the “wrong” advice he gave his friend Taylor Swift about her music. Find out what it was!