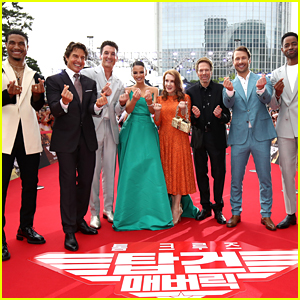 The cast of Top Gun: Maverick gathers together on the red carpet for a group shot at the premiere event held at Lotte World on Sunday (June 19) in Seoul, Korea.

Many of the guys headed straight to the fans who were in attendance, and made time to sign autographs and get a pic with the crowd before heading inside the event.

Jerry‘s wife Linda, and Miles‘ wife, Keleigh Sperry, were also at the premiere.

Just four weeks into release, Top Gun: Maverick has become the biggest hit of the year domestically, with over $473 million in the bank stateside, and nearly $900 million worldwide, according to Collider.

Click inside to see 50+ pictures from the Korean premiere of Top Gun: Maverick…