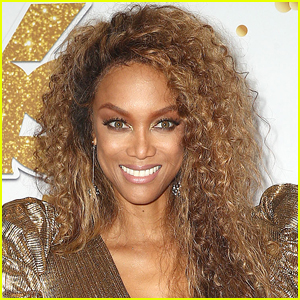 Tyra Banks is taking over hosting duties of Dancing with the Stars!

It has been announced that the 46-year-old model will be replacing Tom Bergeron and Erin Andrews as the new host of the ABC dance competition series for season 29.

Along with being named host, Tyra will also be given an executive producer title on Dancing with the Stars.

“I’ve been a fan of DWTS since its beginning,” Tyra said in a statement via THR. “The fun mixed with raw emotion, seeing celebrities push past their comfort zones, the sizzling dance performances… it’s always transported me to my days of turning it up 10 notches on the catwalk. Tom has set a powerful stage, and I’m excited to continue the legacy and put on my executive producer and hosting hats.”

Earlier this week, Tom revealed that he was let go from Dancing with the Stars after hosting the show for all 28 seasons over the past 15 years.

ABC then released a statement saying that the show is moving in “a new creative direction,” and that Erin will also not be returning.

Find out which former Dancing with the Stars contestant said the show should be canceled after Tom and Erin‘s firings.